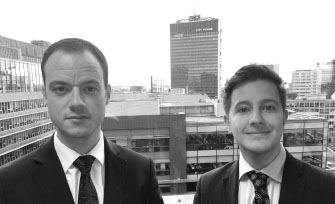 Parkinson have made two new appointments as continued property investment in the North West, fuels growth across all aspects of their service offering.

Neil Higson has been appointed as an Associate Director. He joins from the Manchester office of Gerald Eve having previously been Associate Director at Nolan Redshaw. A chartered surveyor with a BSc in Estate Management, Neil has a wealth of experience and specialises in investment acquisitions and disposals throughout the UK. Neil will be based at the company’s Manchester offices.

Neil strengthens and helps to broaden the scope of the business – his arrival is a significant event” said Head of Commercial Agency, Daniel Crawshaw. “To be able to secure the services of such a respected investment agent, shows the progress we have made over the last 5 years”

Mark Smith has been appointed to the position of Director. Having joined Parkinson in 2007 with a BSc in Property Management and Investment, he qualified as a chartered surveyor and became an Associate Director in 2011. Mark will continue his activity in the Valuation department of the business and is leading the introduction of new client focused initiatives. Mark operates from the company’s offices in Manchester city centre.

“Due to the significant uplift in business and an increase in quality instructions we are winning across Manchester, it’s key that we develop our presence in the city. Our new larger offices, the two new roles and the requirement to attract even more high calibre people into the organisation, makes it a very exciting time for Parkinson” said Mark

“Mark has consistently proven over a number of years that he values high levels of client satisfaction as well as being a natural leader” said Tony Bellis, Director at Parkinson. “His promotion is a fitting way to ensure we fulfil our ambitious plans in the North West.”